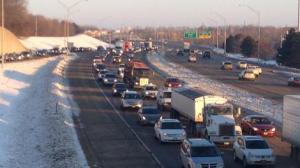 NewsLine9 callers reported that traffic had returned to normal by 8:45 Friday morning.

Check back with KCRG.Com for updates.

Man Expected to Recover After Late-night Shooting in Cedar Rapids

CEDAR RAPIDS, Iowa – A man is expected to recover after he was shot Thursday night in Cedar Rapids.

Officers responded around 10:14 p.m. to 720 1/2 Fourth Ave. SE and found a man who had been shot in the left arm. The man, identified as 35-year-old Joshua Spears of Cedar Rapids, was taken to St. Luke’s Hospital and later transferred to University of Iowa Hospitals and Clinics in Iowa City. His injuries were not life-threatening, police said.  Investigators determined three men, two black and one white, entered the apartment through an unlocked door, and one of the men displayed a “long gun.” Some words were exchanged and Spears was shot. The three suspects then fled the area.

Police believe Spears was targeted, but are unsure about all the circumstances involved.  It was the first shooting of the year in Cedar Rapids after a sharp spike in gunfire in 2012.  Anyone with information about the crime is asked to call Linn County Crime Stoppers at 1-800-CS-CRIME (272-7463) or send a text message to CRIMES (274637) with 5227 in the subject or message area, along with the tip.

Reward money is available if the information leads to an arrest!

FAYETTE, Iowa – Nine days after a drug bust in the early morning hours of Christmas, the Fayette County Sheriff is hoping someone can lead them to two former Upper Iowa University football players.

Check out KGAN’s Facebook pic and comments regarding this story!

How many people will be made into criminals over these archaic marijuana laws? When will it be morally unacceptable to throw someone in prison for growing/using a plant that can be found growing all over Iowa in the wild?  Just remember, there is a market here for marijuana and where there is a market for illegal drugs there are always people willing to take the risk to fulfill that void.  Not everyone likes to go out and booze it up!  The war on drugs has become a war on American families and the resources we’re using to fight this so called war could be used elsewhere to solve real crimes with real victims! Legalizing the plant could save our economy! We will never get anywhere with this until we get rid of Branstad!

We aren’t even a week into the New Year and already someone was shot here in Cedar Rapids, Iowa.  Guns and gun laws have become a hot topic! Gun stores are reporting record sales since the mass shootings across the country took place.