Do you gamble?  Do you drive out-of-town to gamble?  Would you continue to drive out of town to gamble if there was a casino in your hometown? On March 5, 2013 Linn County voters will be deciding just that in a special election.  I circled Cedar Rapids in red on the map of the casinos in Iowa below for people to see how saturated Eastern Iowa already is with casinos.

What would happen if the people of Linn County vote in favor of a casino?  Other casinos worry they could go bankrupt. Make no mistake the casinos in other communities want to keep your business!

Already this casino is generating jobs but not from the side you’d expect. While  a commercial airs over and over on the television advertising jobs the opposition is taking applications and searching for volunteers.  One of their arguments was that this won’t be a county owned casino and that the private investors and their non-profit are the ones calling the shots.When I questioned the “vote no” office workers about who was funding the “no vote” initiative  at their office yesterday they told me that some of the money was invested by outside casinos.  Here is their argument in a flier that I obtained from their office at 1134 9th Street SE, Cedar Rapids, Iowa 52403  (parking in the rear).

The investors  are the  same old people who always find ways to make a quick buck or profit from public money.  Where will the money from Cedar Rapids casino go if people vote in favor of it? I obtained this information from the Vote Yes Linn County website: http://voteyeslinncounty.com/community-improvement 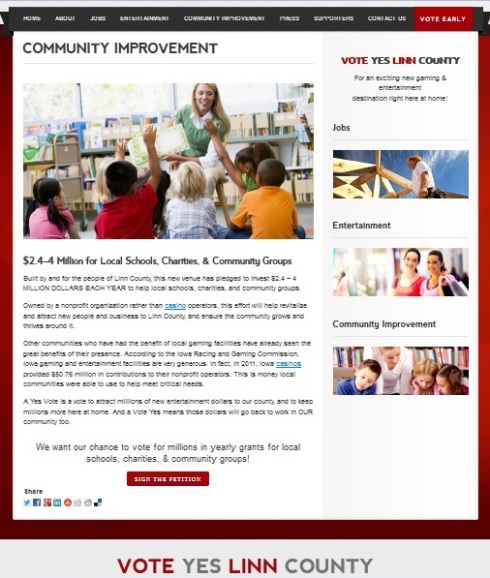 Will this election mirror the last special election? Many of the people who signed the petition to extend the Local Option Sales Tax didn’t even vote in the election. Like other special elections that have taken place in Linn County over the last two years it boils down to trust.

Playing the same commercial  over and over on TV will wear on the public.  Where is the “vote yes” office located?  Where is the public face for the vote yes group and exactly who are they going to reach out to in the community for grassroots support? The labor unions were in support of the Local Option Sales Tax measure that failed not once but twice!

Where are the young local enthusiastic people who worked for the  “vote yes” campaign back in 2003 when this issue was on the ballot?  Those people were energized and were able to get people out to vote in favor of the casino because they were planning to work there when/if it opened. Would a casino improve Cedar Rapids?  Maybe. Would a casino with this set of investors be the wisest decision?  Probably not. 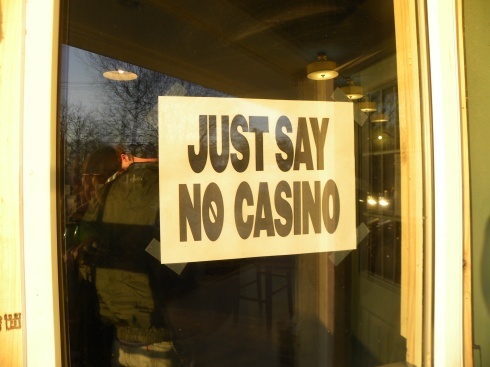 What is going on with Google Maps and the Maine elections? Why were maps with Maine’s Republican Caucus results posted a day early? When I first learned Google had a map of the results from the Maine elections I had to go see it for myself. I first saw it on Facebook. Google later cleared the map.

No one is talking about this mishap from mainstream media. No surprise there. This is just a heads up for those who pay attention to the presidential elections. Watch for news on the Maine Caucus tonight and see if the numbers match the results posted prematurely yesterday.

ABC News already touting Romney as the winner. Not once mentioning Ron Paul in their report even though he is a close second! Ron Paul claims it is a tie!

Here is a CNN report