1.  Monica Vernon blocked me on Facebook.  When I asked her why she told me that I was “too negative” and then added that I was the only person she has blocked.   If Monica can’t handle my commentary on local matters how will she treat people when it comes to state/national issues?  Will she just ignore the people in her district when she doesn’t agree with them?   Will she block you, your parents, or other lawmakers?  Her skin is not  thick enough for the position.
2.  Monica Vernon lied to Cedar Rapids citizens when she advocated for the Local Option Sales Tax. She told the Gazette that “It’s all for housing” and the Gazette later clarified that “90% of the revenue from the sales tax–expected to generate about $18 million a year for the city for five and one-quarter years should voters approved the tax on Tuesday–will be used for the buyout, rehabilitation and relocation of flood damaged housing”  (Gazette Thursday, February 26, 2009). That did not happen.  Instead, historical homes were demolished and people had to wait for the city to get money from the state before they were paid. This while the city made grand plans for a new library, fire station, public works building, and much more.
3.  Monica Vernon does not care about working class people. The neighborhoods full of

working class people were demolished. Many of the people who lived in these neighborhoods wanted to rebuild but they were told no or denied the same funding other people got because of where they were located.  Monica was on the council when all these decisions were made. She never stood up for anyone whose property rights were violated.  Monica never made any effort to save anything on the west bank. Nor did she fight for the working class people when it came to buyouts. Houses were torn down before the homeowners were compensated and they weren’t compensated with the LOST money. Furthermore, Monica told me that the Local Option Sales Tax Oversight Committee (a committee I was a member of for one year) in an email that it was set up without authority on purpose! “When we set up the committee it was set up to express concerns and caution the council but with no authority.”  “That was by design.” Monica Vernon

4.  Monica Vernon doesn’t care about the Constitution. While in office Monica supported unconstitutional ordinances that has gotten the city sued not once but twice.
5.  Monica Vernon only became a Democrat when she wanted to gain the votes of the union members. Before that she was a Republican.
6.  Monica Vernon’s commercials make her sound like a single mom who knows the struggles. She claims she worked hard from her kitchen table to build a business. She fails to mention that her husband is a successful lawyer and that she is in the banking business. http://thegazette.com/2009/12/23/central-city-bank-sold-to-local-investors/
7.  Monica Vernon does not have the courage to take on the “Tea Party gridlock” as she claims in one of her commercials. She doesn’t go to “Tea Party” meetings nor does she try to communicate with anyone that I know of in our local “Tea Party” movement. She will not represent the constitutional conservatives of District 1.
8.  Monica Vernon has done nothing for troubled young people in Cedar Rapids. Since the beginning of 2014 seven people have been murdered in Cedar Rapids. Two of the killers have only been caught because they turned their guns on themselves. Young people have no affordable healthy outlets that I know of in Cedar Rapids.  She claims in one of her commercials that “we need to stand up for what’s right, together” but she hasn’t stood up for what’s right on so many instances I can’t believe a word she says!
9.  Monica Vernon does not clearly understand the meaning of “conflict of interest”. 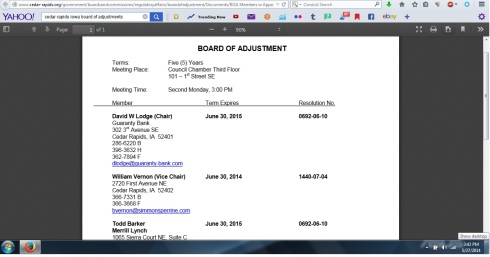 Monica voted in favor of  her husbands position on the Board of Adjustments.  The Board of Adjustment is where one goes to get zoning changes and variances.  I question most of the decisions she has made through the years.
10. Monica Vernon supported giving millionaires tax breaks through TIFs (Tax Increment Financing) therefore competing with local business owners. She has also voted to give hundreds of properties away to these same millionaires. Go to: Get The Facts CR for more information.

Monica Vernon is bad for Cedar Rapids and she would be a disaster for Iowa. While we go through these primaries I hope that people do their homework and look into all the candidates on the ticket and chose anyone but Monica Vernon.

There is nothing 'radical' about wanting to save your historical neighborhood! There is nothing 'negative' for wanting an 'outside investigation' done a public service that has had a lot of embarrassing news, especially when they don't do their jobs! There is nothing 'odd' about wanting politicians to uphold the Constitution they swear to uphold when they are sworn into office! Follow @sibzianna END_OF_DOCUMENT_TOKEN_TO_BE_REPLACED
This entry was posted on Wednesday, May 28th, 2014 at 11:53 am and tagged with cedar rapids, Congress, democrat, iowa, Monica Vernon, Repulican, Tea Party and posted in activism, Advocates, Cedar Rapids, Iowa, Constitution, FEMA, Iowa Politics, world news. You can follow any responses to this entry through the RSS 2.0 feed.
« “New Casinos make Existing ones Better, Cedar Rapids Casino Manager Says” Gazette